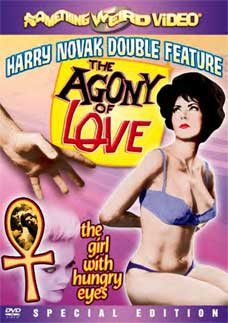 THE AGONY OF LOVE (1966)/THE GIRL WITH THE HUNGRY EYES (1967)
Director: William Rotsler
Something Weird Video/Image Entertainment

It's not surprising that even with the vast number of Harry Novak discs Something Weird has unleashed on the market, there are still several undiscovered gems still languishing in the vaults. One of the most requested, THE AGONY OF LOVE, is often hailed as Novak's shining moment; directed by renaissance man William Rotsler and paired with another Rotsler skin parade, THE GIRL WITH THE HUNGRY EYES, this is a double feature fans have been craving for ages! 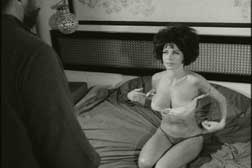 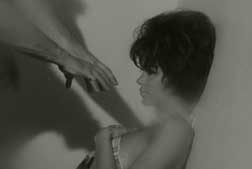 Awkwardly dubbed but filled with striking black-and-white imagery, Rotsler's sexploitation masterpiece is easily one of his most accomplished works. The opening chase sequence features stark lighting out of a film noir, and many odd camera angles and set-ups (including a Wishman-esque shot of Barbara putting on her high heels) and gorgeous lighting techniques make the film a consistently interesting watch, even though the plot is simple and the sex less than erotic. The dream sequence of Barrington frolicking with a never-ending stream of money while an ominous voice repeats "Barbara" and "money" in a frantic flow is right out of a foreign arthouse film, and actually would later be copied by Fellini. AGONY OF LOVE is probably too slow-moving to be appreciated by tried and true sexploitation fanatics, but its touches of art and intelligence validate the theory that not all sexploiteers were just after a quick buck.

The character of Barbara is an intriguing one, but would have benefited from a different actress being cast. Pat Barrington (aka Pat Barringer) has developed a strong cult following over the years, despite the fact that her breasts are rock-solid implants and she can't act worth a hill of beans. She is quite lovely, but it's understandable why she was rarely given lead roles in sexploitation films: she can't deliver dialogue. Other than Stephen Apostolof's ORGY OF THE DEAD (1966) and this film, Barrington usually popped up in stripping sequences throughout her career, and soon disappeared as hardcore was peeking over the horizon. According to her directors, she always had a diva mindset, believing she was going to be a big star and should be treated as such. AGONY OF LOVE is her signature film, so fans of hers will be pleased it has finally come home to DVD. Harry Novak also contributes a cameo as a polite gentleman who holds a door open for Pat Barrington...then gives her the once-over as she walks by! And look fast for handsome director Rotsler during an orgy scene (he always managed to cast himself in sex scenes with his leading ladies, this time with Pat Barrington!). He also plays a rough client who likes to bitch-slap Barbara. 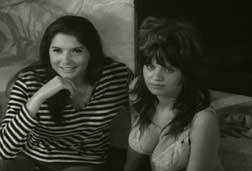 On the other half of the double bill is a less-exciting, silly flick from Rotsler, THE GIRL WITH THE HUNGRY EYES. The film opens with lesbian lovers Kitty and Tiger speeding down the California highway, stopping to pick up hitchhiking Tommy at Kitty's insistence. Tiger doesn't take too kindly to the fact that Kitty and their new passenger start making out right in front of her, so stops the car and kicks them both out! Little does she know that Kitty has decided to switch sides and when the two horny young'uns start making love in a field, the voyeuristic Tiger jumps from the bushes and bashes Tommy's head in with a rock! She takes the distraught Kitty home, where she reminisces of how she became Tiger's sapphic companion and also of happier times with a bearded older male lover (William Rotsler again!). She awakens from her flashback in time for a birthday party, attended by all manner of dykes, baby butches, and femmes (including Pat Barrington in a throwaway role) and livened up by Tiger getting into a vicious catfight with a super-butch lesbo! Kitty grows tired of the lady-lovin' lifestyle and escapes from the shindig to the arms of her former lover...but Tiger won't let her get away so easily... 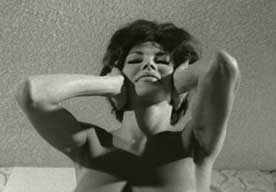 Rotsler's accomplished black-and-white camerawork is once again in full force here, with a gripping opening driving scene really getting the audience's attention. Unfortunately, the film's storyline is sidetracked too often with nude love scenes shot with a Vaseline-covered lens, a never-ending shower scene, and a lethargic party sequence which drags on forever. Tiger drives for what seems like hours, looking for Kitty. What could have been an interesting companion piece to FASTER PUSSYCAT! KILL! KILL! ends up being a not-so-captivating curio from Rotsler's early years. The biggest shock of the film is the young ingénue, Vicky Dee. Eagle-eyed viewers will recognize her as perky-breasted Adele Rhein, the buxom starlet of Russ Meyer's COMMON LAW CABIN! It is a wonder this fact has gone unnoticed for so long, but this is the German cutie's only other known film, so it's of key interest to Meyer completists. Cathy Crowfoot, as Tiger, is the real star of the show, with a sneering face and psychotic eyes and really digging into her role. Those who have really strong vision will recognize several sequences are outtakes from AGONY OF LOVE, probably shot around the same time. Pat Barrington even wears the same black wig!

Kicking off the extras are the theatrical trailers for the features. AGONY OF LOVE's trailer does a great job selling the film with its many sex scenes, and the trailer for GIRL WITH THE HUNGRY EYES is much better than the film itself. Three trailers from Lou Campa epics are included: COOL IT BABY, MINISKIRT LOVE, and VENUS IN FURS, all of which are compiled on a triple feature discs released the same day as this one! COOL IT BABY's trailer is actually pretty boring, but the narrator's whisper of the title is great. MINISKIRT LOVE shows more unerotic sex scenes the Lou Campa way, and doesn't give away the filthy incest angle of the feature. VENUS IN FURS is the best of the Campa trailers, with lots of arty shadowy clips of the film, sexy men and women, and images out of a Findlay epic! DIARY OF A SWINGER (starring the alluring Rita Bennett, billed here as Joanna Cunningham) is a John Amero film, with a beautiful young girl being raped in the woods and moving to the big city to escape her smalltown shame. Things only get worse for her there. This is the best trailer of the group, with lots of enticing scenes of lesbianism, attempted suicide, and New York City sleaze; thankfully Something Weird offers this on tape, and will hopefully bring it to DVD soon! FREE LOVE CONFIDENTIAL was originally to be included on the aforementioned Lou Campa triple feature, but was dropped for an unknown reason. The film itself is better than the trailer, which doesn't let loose the interesting plotline of two bored housewives who are blackmailed by pornographers who photographed them when they attended an orgy. 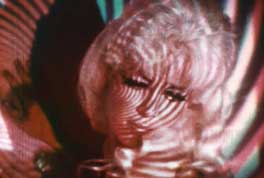 Two of the three shorts included on the disc feature Pat Barrington in signature strip tease sequences. "Pat Barrington on Acid" is an excerpt from HEDONISTIC PLEASURES (1969). A hippie couple takes acid and blonde Pat appears in their trip, dancing to groovy music in a see-through cloak before writhing nude against a wall during a psychedelic lightshow. "Pat Barrington Belly Dance" is a silent storefront short with groovy music. Barrington, in another blonde wig, does a wild belly dance while a group of hippies smoke pot by the side of a lake and go skinny-dipping after getting turned on Pat's wild gyrating. The third short, "Lesbian Hooker Turns a Trick," follows a young whore as she walks the streets of New York, looking for a john. The documentary-style footage is very well-shot, in grainy 16mm, and shows how the girl makes her living pretending to enjoy sex with men when she really wants to make love to a woman.

Finishing off the disc is a duo of Harry Novak galleries, with the requisite photos, posters, and pressbooks of Novak gems like KIDNAPPED COED, CYNTHIA'S SISTER, JUST THE TWO OF US, and other familiar titles and images that have been seen before. The audio includes music from AGONY OF LOVE playing over these fantastic ad campaigns. (Casey Scott)