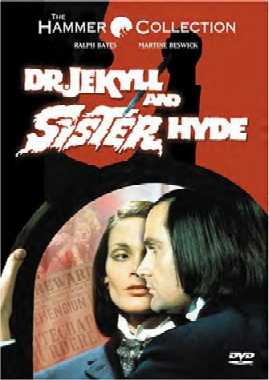 DR. JEKYLL AND SISTER HYDE was willingly contrived after Brian Clemens' clever title suggestion to Hammer-head Jimmy Carreras. Already having several Hammer performances under his belt, Ralph Bates was instantly cast as Jekyll, but it took some searching before his female alter ego would be chosen. Although there were several candidates (Caroline Munro, Julie Ege), it's hard to imagine anyone else but Martine Beswicke in the roll.

Set in Victorian London, young Dr. Jekyll (Bates) spends all of his hours performing experiments in his private flat. Jekyll is determined to formulate an Elixir of Life using female hormones, severed from the glands of fresh corpses. Eventually he succeeds, and after consuming his formula, he's transformed into a ravishing but evil raven-haired woman (Beswicke). Jekyll tells friends and neighbors that she's his widowed sister, Mrs. Hyde. As fresh corpses become harder to come by, Jekyll stalks the streets, murdering prostitutes to obtain their glands so that his female persona can continue to exist. But Mrs. Hyde's destructive will is bent on overcoming her creator once and for all.

In the hands of most filmmakers of the time, such a gender-bending theme would call for maximum exploitation tactics, but not with Hammer. Clemens' script doesn't take itself too seriously, yet justly fuses the legends of Stevenson's titular character with Jack the Ripper and the graverobbers Burke and Hare (well performed by Ivor Dean and Tony Calvin). Roy Ward Baker does an excellent directing job, allotting for the right amount of sensuality and violence without going overboard, keeping it a classy affair. The low budget reveals an obvious restriction of sets, but Baker is able to convey a hearty vision of 19th century London.

Bates is great as usual, and even though his Jekyll is not as hateful as his Baron Frankenstein, the character is uncouth, obsessive, and a murderer to boot. Beswicke's sister Hyde is the personification of seductive charm: icy and irresistible at the same time. Bates and Beswicke reportedly didn't bare any kind of resemblance in person, but the onscreen melding is extremely convincing and uncanny. A number of camera tricks were utilized to show the transformation, and these are proficiently executed as well.

Gerald Sim is an older doctor who falls victim to Sister Hyde's attributes, and Lewis Fiander is a lazy dandy who also strives for her attention (both actors were in DR. PHIBES RISES AGAIN shortly after this). It's also interesting to note that Virginia Wetherall--who appears as a street-walking victim of Jekyll--became Bates' wife, and they were wed up until his untimely death in 1991.

DR. JEKYLL AND SISTER HYDE first came out on home video from HBO, with a horribly dark transfer (mostly due to a "copy guard" signal) and later in a more acceptable incarnation from Republic (in EP and later SP speed). Anchor Bay's new transfer puts those to shame. Letterboxed at 1.85:1 and 16x9 enhanced the colors now look more vibrant than ever, and even the numerous outdoor fog-bound scenes are now more clear than ever. The mono sound is exceptional, and there's a French language track as well. The film was originally released theatrically in the U.S. by American International, who edited it to get a PG rating. This disc of course contains the full, uncensored British cut of the film.

A great audio commentary was conducted for the disc featuring co-star Beswicke, director Baker, and writer/co-producer Brian Clemens, moderated by Hammer Films historian/author Marcus Hearn. All three fondly recollect about working on the picture, with lots of anecdotes about Hammer Films and Jimmy Carreras. For example, Baker and Clemens discuss the freedom and trust given to them by the company, while Beswicke defines Hammer as a big family.

Other extras include the British theatrical trailer (not the U.S. one narrated by BLACULA's William Marshall), radio spots affirming AIP's lurid advertising campaign ("The sexual transformation of a man into a woman will actually take place before your very eyes!"), a poster and still gallery, and well-written talent bios on the main participants. (George R. Reis)