A car audio sounds great in a fast car. Its sound effect always depends on its quality and the brand name. There are lcd monitors which have grat resolution and flat screen to give a spectacular effect to viewers of a movie. We can use a portable dvd player. It is a great item for those who travel on long flights and road trips. The Incredible Two-Headed Transplant/The Thing With Two Heads

Latest 642-832 dump and SY0-401 braindumps practice questions delivers in depth understanding so you will pass Pass4sure VCP-510 exam on time. See more detailS about this product on wikipedia and Visit University of Chicago website best of luck. 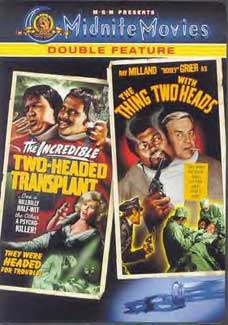 In 1971, AIP released a profitable two-headed monster movie, THE INCREDIBLE 2-HEADED TRANSPLANT, which featured the head of a lunatic criminal being transplanted on to the body of a 7-foot simpleton. The following year brought us THE THING WITH TWO HEADS, with the even more palatable idea of transplanting the head of a white bigot onto the body of a convicted black man. This ludicrous/fun sci-fi picture is actually the slickest effort made by the producer/director team of Wes Bishop and Lee Frost, also responsible for AIP's final biker film, CHROME AND HOT LEATHER (1971), while the former remains the sleazier of the two and is equally engrossing for fans of this kind of stuff. Now, MGM has re-packaged THE THING WITH TWO HEADS as a double header (sorry about the pun) with THE INCREDIBLE TWO-HEADED TRANSPLANT in one of their most clever MM pairings to date.

Years before mainstream Hollywood acceptance, Bruce Dern stars as Dr. Roger Girard, a nutty scientist living in the middle of nowhere with his beautiful and neglected wife (Pat Priest from

TV's "The Munsters") and creepy little oddball assistant Dr. Max (Barry Kroeger). Roger is obsessed with experiments dealing in animal head transplants, which have been successful on the various snakes and rabbits in his lab, so he now has is sites on human beings. Meanwhile, deranged killer Manuel Cass (Albert Cole) is escaped and on the loose in the barren area where Roger's home lies. Cass makes his way to the house, kills the caretaker (the late Larry Vincent, better known to many monster movie fans as 60s TV horror host Seymour)

and abducts the bikini-clad Linda. Roger and Dr. Max eventually catch up to them, saving the wife and shooting the nutty Cass in the back. When they bring his dying body home, Dr. Max suggests transplanting Cass' head on to the body of the 7-foot mentally retarded son of the caretaker, Danny (John Bloom, the monster in DRACULA VS. FRANKENSTEIN). The result is the campy titular creature, sporting red underwear and denim overalls.

Preying on several unwashed bikers (one played by Al Adamson regular and frequent stuntman Gary Kent) as well as some hapless necking teens, the two-headed monster goes on a rampage of destruction, as Roger's best friend (played by Casey Kasem!) tries to convince his pal to put an end to the hulking beast. In the meantime, Linda can't keep her mo

uth shut, and her threats to call the police have her gagged, tied up to a bed, and even thrown in a cage for most of the duration!

THE INCREDIBLE TWO-HEADED TRANSPLANT has always been kind of fascinating for grade Z movie fans, as its monstrous combination of Al Cole's gap-toothed grinning and devious natured lunatic fixated on the shoulder of and easily taking control over John' Bloom's crying, head-shaking idiot is simply unforgettable. This exercise in low budget sleaze is accompanied by a grating yet appealing score of the "wah-wah" and heavy base sort, and also includes a melancholy theme song (performed by female artist Bobbie Boyle) titled, "It's Incredible." There's enough bloodshed and sadism on display for its rating to change from the original "GP" to a more extreme "R" today, and anyone with knowledge of Kasem's career as a DJ and cartoon voice artist will get a chuckle to hear him doing the film's "maniac 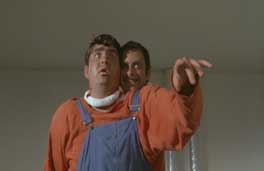 on the loose" radio news flashes, especially when he himself is listening to them in his car!

Given its first official and proper home video release, THE INCREDIBLE TWO-HEADED TRANSPLANT is presented in its original 1.85:1 aspect ratio with anamorphic enhancement. This transfer looks incredible, bringing out amazing detail and vivid colors never before evident before. MGM's DVD is kind of a revelation, making the low budget film look better than ever and revealing things on screen that were difficult to make out in the various TV airings and bootleg tapes of the past. There are some abrasions on the film source which mainly occur during the film's climatic mine shaft explosion, so they are not at all distracting when put in perspective of the top-notch quality. The Dolby Digital mono audio track is satisfying, and there are optional English, French and Spanish subtitles. The only extra is the original trailer, which reads the title as "The Incredible 2-Headed Transplant.

On the flip side of the disc is THE THING WITH TWO HEADS, previously released by MGM as a single DVD in 2001. Dr. Max Kirshner (Ray Milland) is a bigoted doctor, confined to a wheelchair and dying of terminal cancer. Despite this, Kirshner conducts secret experiments in his basement (where else?) laboratory and has succeeded in transplanting the head of a gorilla onto the body of another gorilla. The two-headed ape escapes and causes havoc in a local grocery, but the animal is sedated after if finds solace in a banana. Kirshner is able to remove the gorilla's original head, allowing the other head to fully function with the new body, and he now wants to put his head onto a healthy human. Since his crippled, cancer-ridden body is expiring quickly, the operation must be done at once.

Kirshner talks his colleague, Dr. Philip Desmond (Roger Perry from the "Count Yorga" films) into conducting the operation, and now a donor must be found. A call is made to death row, and Jack Moss (Rosey Grier), a beefy black man sentenced to the chair for a crime he didn't commit, volunteers in order to buy him time to prove his innocence. After the transplant is completed, Kirshner wakes up to the surprise of his life ("Is this some kind of a joke?"), but is able to except it, knowing his head can later be transplanted onto a more fitting body (white). Moss on the other hand freaks out and escapes. Now on the run with the loud-mouthed whitey affixed to his shoulder, he forces another doctor, Fred Williams (Don Marshall of "Land of the Giants" fame) to drive them away from the police who are in high pursuit of them. Williams had earlier been turned down for a position at Kirshner's hospital since he is black, so he's perfectly content to help Moss. After running on foot for a while, Moss takes a motorcyclist's bike with Dr. Williams straddling behind him as they ride recklessly. What ensues is an action-packed but much too lengthy car chase involving inept policemen--like something you'd see in a Hal Needham film.

Though played pretty straight, much of what makes the film so amusing is the lively banter between Milland and Grier. Milland often shouts lines that would make Archie Bunker blush, and by the time they get to Grier's girlfriend's house for refuge, he says thing like, "What are we having for dessert, watermelon?" when subjected to soul food, and "Is that all you people ever think about?" when they consider making love in the presence of his flustered head. You do have to wonder what was going through Milland's head as he was reciting dialog while resting his chin on the shoulder of a 300 pound ex-football player?

Yes, when Rosey walks around or rides a motorcycle with the phony Milland head on him, it does look pretty silly. But the special effects are actually pretty good on a whole, being created by Dan Striepeke (who later worked on "The Planet of the Apes" TV series), and his accomplished team, which included a very young Rick Baker, basically just starting out here (that's Baker in the very convincing two-headed gorilla suit). The actual head transplant scene is very well done and comes off a lot better than many of today's exaggerated CGI effects. Look for cameos by William Smith (as a raving prisoner), legendary B-movie producer Albert Zugsmith (!), and the director himself as a bumbling police sergeant. And don't forget the happy ending, featuring a sing along chorus of that gospel favorite... "Oh Happy Day!"

MGM has released the film on DVD with a near-flawless transfer. The source material is in perfect condition, with beautiful colors and sharp detail. Despite the dated 70s fashions and long sideburns, the film hardly looks 30-plus years old with this fresh transfer. It's letterboxed in its original 1.85:1 aspect ratio, but no anamorphic enhancement. The Dolby Digital mono audio is exceptional for a film of this ilk. Also included is the original theatrical trailer ("…so they transplanted the white head onto the black body. Who would have suspected that neither would care for the idea too much?"), and there's optional French and Spanish subtitles.